Let’s assume that you are in conflict with a trader in another EU country and you want to take your case to the court. Will you have to travel to that country accompanied by a lawyer? No. Exercise your rights at home via the European Small Claims Procedure. This is a simple and cheap procedure based on standard forms that are used to communicate with the court. Find out below how it works.

European Small Claims Procedure: what is it?

EU procedure for minor disputes: how much will it cost?

How much will you have to pay for the European Small Claims Procedure? This varies from country to country.

This certainly applies to the court fees. In some Member States there are even no court fees, while others have a rate depending on the value of the dispute. So always check carefully which court fees apply to your dispute, and whether you must pay these costs upfront or only at the end of the legal procedure.

Also take into account additional costs associated with an enforcement procedure with corresponding translation costs. Usually, you will have to pay up front for this. If you win the procedure, the bailiff will claim costs you incurred from a creditworthy other party. But remember, if you lose, you will be responsible for your own and the other party’s costs.

Did you win the procedure? The opposite party must in principle reimburse you for the costs of the proceedings. Sometimes the judge decides to split these costs between the two parties. If the opposite party is unable to pay the costs, e.g. due to insolvency, you will unfortunately not be able to recover anything.

Did you lose the procedure? In that case, you may have to bear all costs of the court and possibly of the other party.

EU procedure before a Belgian court?

In Belgium, consumers would submit the case to the Justice of the Peace for claims up to 5000 euros. The court fee is 50 euro and must only be paid at the end of the legal proceedings and this by the losing party.

The judge may also have the losing party pay a legal allowance. This is a standard rate to accommodate the opposite party’s lawyers’ fees.

You cannot always litigate in Belgium, as the competent court can also be a court in another Member State.

The European Small Claims Procedure is a completely written procedure. Sometimes the court finds it useful to set up a hearing that requires the presence of the opposing parties. In this case, ask if this hearing can take place via videoconferencing, teleconferencing or any other method of remote communication. You must also be informed on time of the hearing date. 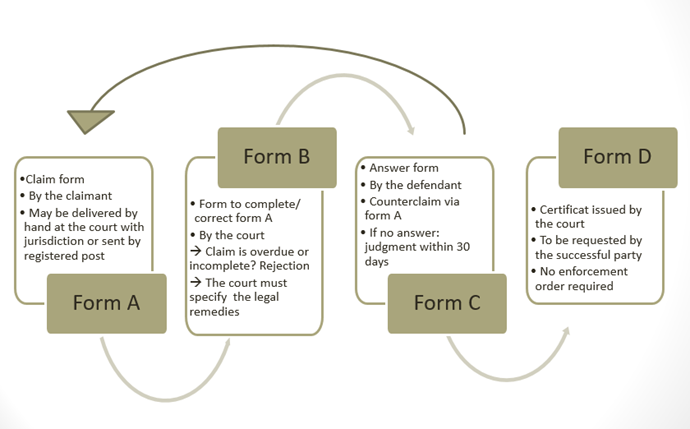 The European Small Claims Procedure is based on seven steps using 4 different forms. The forms can easily be downloaded from the European e-Justice portal.

Step 1: you complete your claims form

Your claims document, form A, consists of nine sections. Ensure that you complete all the details. Make sure all information is correct. For example, if you fill in the wrong address for the opposing party, the judgment may not be enforceable.

Do you have other relevant documentation such as your contract, order confirmation, proof of payment or e-mail? Definitely include this with your claims form and send everything with a registered letter to the competent court.

Not sure which court is competent? Check it out on this page.

Step 2: the judge accepts or rejects your application

Provided that form A is completed correctly, the judge will activate your case. If the form is incomplete or incorrect, the judge will notify you of what needs to be rectified, using form B.

Step 3: the other party receives a copy of form A

If your dossier is complete, the judge will send a copy of form A and other supporting documentation to the other party within a fortnight.

Step 4: the other party must respond within 30 days

With an European Small Claims Procedure, the other party has thirty days in which to respond using part II of form C. The judge will send you a copy of his response within a fortnight.

The judge has thirty days in which:

The court’s verdict is binding for both you and the other party. Is the verdict to your advantage? That does not necessarily mean that you will receive compensation. You will only have a chance of receiving your money, provided that the trader is creditworthy.

Have you won the case? Ask the judge to forward form D free of charge and to execute the verdict. If the verdict is to your disadvantage, the ball is in the other party’s court.

Step 7: request the implementation of the verdict

Does the trader not execute the verdict resulting from the European Small Claims Procedure voluntarily? In that case, initiate an enforcement procedure with the relevant authorities in the other party’s country. Send the following documentation to the competent authorities:

Remember: it is the judge who rules in your favour or against you. The ECC can provide you with information, but unfortunately it cannot guarantee the success of, nor provide support with, the procedure.

More about this topic